Karnataka Bank is poised to create many new bench marks 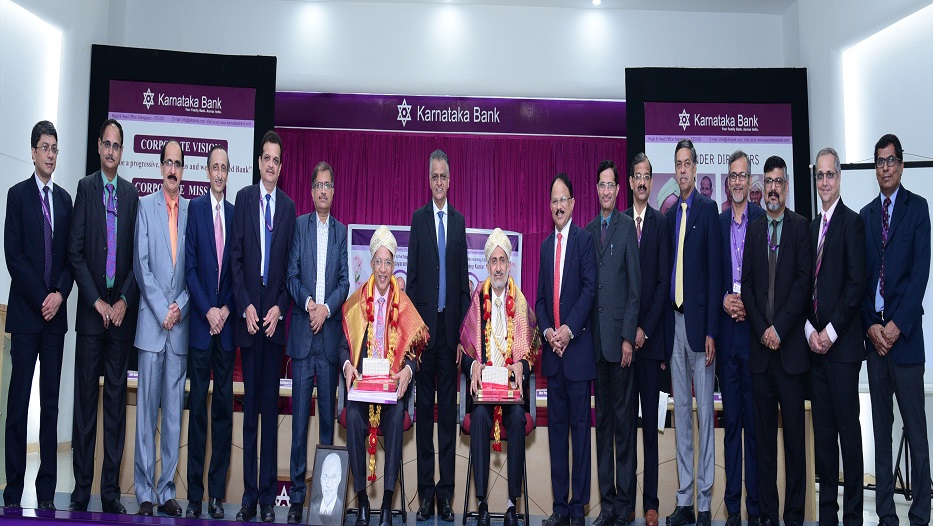 Sri P Jayarama Bhat, Part–time Non – Executive Chairman of Karnataka Bank today retired from the service after completing his term approved by the RBI. He took charge as the Part-time Non-Executive Chairman of the Bank on 12th April 2017. In his farewell address to the staff members, Sri P Jayarama Bhat, said “it has been a privilege and an honour for me to serve Karnataka Bank for such a long period of nearly 5 decades in different capacities. I take this opportunity to thank Sri Mahabaleshwara, MD & CEO, Board of Directors, former Directors and all the present and retired members of KBL family for the support given during my stint at the Bank. As we approach Centenary Year of the Bank, I am sure that Karnataka Bank will create many new benchmarks in the Indian banking industry”. Further, he welcomed Sri Pradeep Kumar, the new Chairman of the Bank.

Greeting the outgoing Chairman, Sri Pradeep Kumar in his maiden address said that, “it is a huge achievement in itself to serve Karnataka Bank for nearly 5 decades, a record not just in the history of Karnataka Bank but also in the entire Indian Banking industry. With new players in the banking industry it is imperative that we constantly upgrade our skill set and knowledge to improve productivity and business generation. He also urged the staff members to take a pledge to work with an attitude to delight the customers with their service while being vigilant and responsible about the aspects of data privacy and cyber security besides adhering to extant compliance guidelines“

Bidding farewell to the outgoing Chairman, Sri Mahabaleshwara M.S, MD & CEO, said “Having played such a pivotal role in the growth of the Bank for a considerable period of time, Sri P Jayarama Bhat was considered as a leader par excellence in implementing the vision of the Bank and in garnering the goodwill and commitment of the staff members towards attaining sustainable business. Being a true mentor and leader, Sri P Jayarama Bhat has inspired a whole generation of KBL family in taking forward the legacy of Karnataka Bank. Further, Bank is also fortunate to have Mr. Pradeep Kumar, a seasoned Banker as its new chairman and I am excited to work with him in taking the Bank to still greater heights”